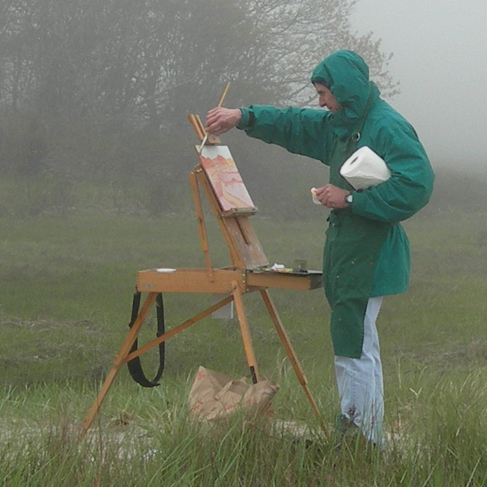 Robert Carter is a representational painter in oil and oil pastel in the American Impressionist tradition.  His art primarily consists of landscapes and seascapes, based on scenes from Cape Cod and throughout New England.  His approach to oil painting was developed from extensive self-study and under the tutelage of Copley Master Artist William Maloney, O.P.A., whom he considers his principal artistic mentor.  He has also studied with the late Don Stone, N.A., Stepelton Kearns, and other prominent working artists.

For his oil paintings, Bob uses a limited palette composed of the primary colors (red, blue, yellow), orange (a convenience color), and white.  He uses no tube purples or greens, preferring to mix these from the primaries.  His only earth pigment is yellow ochre.  As with the original French Impressionists, he uses no black, and colors are usually laid down with minimal mixing.  Brush stroke assumes equal importance with composition, value, and color in rendering the visual and emotional content of the image.  Bob is careful to use only those materials and practices that will result in works of maximum longevity.  for example, he only uses the most light-fast pigments on primed linen, which he usually stretches or mounts on board himself.  Most works are executed alla prima (in one session) to retain spontaneity and to produce the strongest paint film.  Paintings may be created on site (en plein air), from reference photographs, or from memory.

For his oil pastel paintings, Bob uses the highest quality artists' pastels, originally developed by the French firm Sennelier at the request of Pablo Picasso. Like his oil pigments, these are completely light-fast.  Works in this medium are executed on heavy-weight sanded paper and framed under non-reflecting museum glass.